Sue Limb Oct 13, 2021 Sue Limb
'I am just going outside and may be some time.' With these words, on 17 March 1912, Captain Oates walked out to his death in an Antarctic blizzard and won a place for himself in history as 'a very gallant gentleman'. His reputation for courage and endurance as one of the members of Scott s doomed expedition to the South Pole is as powerful today as it was almost a century ago. Yet, as Sue Limb and Patrick Cordingley reveal in this new edition of their classic biography of the man, there is much more to Captain Oates s life than his final famous act of self-sacrifice. Their work is, as Sir Ranulph Fiennes noted, a fascinating character study of a quintessential British hero'. 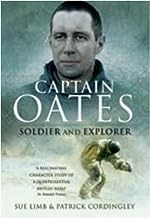